Posted at 14:53h in Offshore Team Blog by Molly Robinson

The All American Offshore Team gathered in Cowes on the 9th to attend the Transatlantic Race Awards Ceremony. The team had several things to celebrate. It was the first time we came together since parting ways on July 17th, and we won the Venona Trophy for the being the first youth team to finish.

It was a beautiful warm day. We woke up and worked on the boat until 12:00 and then went home to shower and get ready for the awards. The showers got a work out as the 16 of us rushed to clean off and not use up all of the hot water. As people emerged from their rooms all dressed up, the team applauded and teased one another about their outfits.

Welchy in his pink shirt and light green jacket was a favorite. Benny managed to sneak into the yacht club in flip flops. The team has a variety of styles, but in the end I think we clean up well.

We piled into three cars and sprinted over to the ferry to Cowes.  Cowes was full of fast race boats, happy people, and streets that were flooded with beer. One of my personal goals for 2013 is to race in Cowes Race Week, it looks like a blast.

We stood on the lawn and sipped champagne as we watched the last races of the day. The team was full of smiles as we mingled with our competitors. The Princess Royal, Ann, helped hand out the awards and it was wonderful to see Charlie walk up and claim the Venona trophy for the Oakcliff All American Offshore Team. 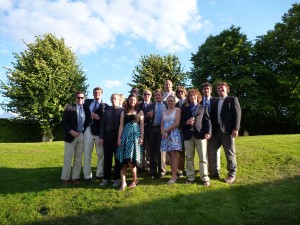