Nathan Fast with the Neutrogena Camp in Barcelona

13 Apr Nathan Fast with the Neutrogena Camp in Barcelona

Posted at 10:26h in Offshore Team Blog by DM Patten 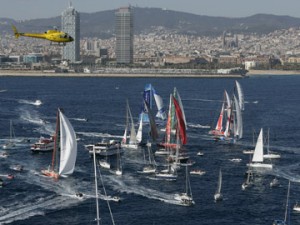 As the world watched their computer screens to see the Barcelona World Race boats finish, AAOT member Nathan Fast witnessed American Ryan Breymaier and the other double handed around the world competitors’ arrival in person.
This is the second time the Barcelona World Race has taken place, the first was in 2007/08. Now, the second race is wrapping up with Jean-Pierre Dick and Loick Peron grabbing first on 4/05/2011 and just recently Ryan Breymaier and Boris Herrmann finishing on 4/10/2011 in fifth. As the remaining boats race to the finish AAOT team member Nathan Fast is with the Neutrogena Camp in Barcelona.  He is collecting advice for AAOT ‘s upcoming ocean race and learning from the lone US Competitor in the race, Ryan Breymaier, Skipper of Neutrogena.
In the mean time other AAOT members head to the Baltimore docks to wake the Vanquish up after months of winter storage. Nathan will return from Barcelona to rejoin the team in Baltimore on April 19th. As progress is made and we start to get the images in, we will be setting up a couple new Facebook albums so you can visually track the team’s progress. Look for the  “Yard Games Series”  and watch the progress as the team readies Vanquish for the upcoming 2011 race season.