Posted at 23:59h in Offshore Team Blog by Molly Robinson 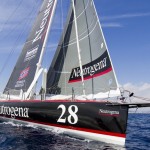 All American Offshore Team member, Nathan Fast spent time with Ryan Breymaier, right after he finished the Barcelona World Race on April 10, 2011. Breyamier was the only American in the second edition of the Barcelona World Race, and not only gave Nate a great interview, but also fed him, showed him around the boat, and offered him advice for the  2011 AAOT ’s upcoming races.
Fast arrived at Vanquish after traveling through Europe for a semester, this is how he described his experience:
Nate Fast reports from finish of Barcelona World Race, April 2011:

With a semester off school what do you do?
Taking into consideration those language classes in high school,  I traveled to Spain to experience their culture, way of life, and meet other people this spring.  Luckily, I was able to be in Barcelona when Ryan Breymaier finished the Barcelona World Race on Sunday April 10, 2011.  Ryan is a graduate from Saint Mary’s College of Maryland, and has been sailing in Europe on the Kairos.  I was able to meet him at the finish, join the shore crew for  few days, and see his open 60 along with all its systems in Barcelona.  He was nice enough to share some of his experience with the AAOT in an interview, enjoy
– Nate Fast
Barcelona World Race and Ryan Breymaier, Nate Fast. April 2011