Posted at 10:19h in Offshore Team Blog by Molly Robinson

Kaity Storck has an extensive sailing background. She had an extremely successful college sailing career where she was named Quantum Female college sailor of the year, was a two time All American and won other awards. After college she pursued 470 sailing with her college crew, and recently has been competing in match racing and team racing. 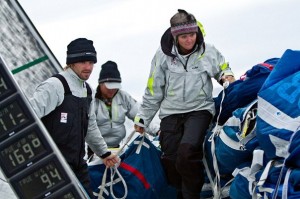 In late January, my friend Charlie Enright called me.  He explained a youth team that was to sail across the ocean.  Ralfy Steitz, who was crazier and kinder than I had heard, was giving the team his foundation’s STC 65 Vanquish.  The concept was to create more high level offshore racing opportunities for young American sailors, and they needed some girls.  I quickly submitted an updated and polished sailing resume to Charlie.  He called me twice in the next two months to explain the full schedule and double check that I could still make myself available.  The entire time, I anxiously awaited.  In March I received an email stating that I had made the team.  The All-American Offshore Team (AAOT) was formed.

May came and the waiting finally stopped.  A week before the start of the Block Island Race the team came together at Kings Point.  Some came up from Baltimore, delivering the Vanquish that many had been working on for over a month.  After a Safety at Sea weekend of getting to know our new teammates, the long days began.  There was still plenty of boat work to be done.  I thought I had gotten a taste of boat work in the 470 class, which I had, but I soon realized the bigger the boat, the more work one can create.  The plus is that there are also more people to do the work making it much more enjoyable.  I quickly learned that the sailing to boat work ratio in ocean racing is far less balanced than anything I had experienced before.  Perhaps this is why when we do go sailing, it is an incredibly enjoyable experience for all. 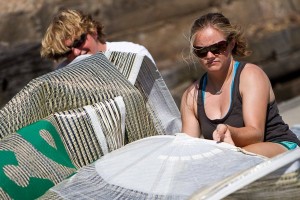 That first week was telling of the next three months.  I learned my body needed to be in a different kind of shape for the Vanquish, especially since Charlie had put me on runners as my starting position.  Between the early morning workouts, following the lead of fitness experts Colin Orsini and Matt Noble, and attempting to put 10 tons of load on the forestay, I was sore.  After the gym we would start working on the boat around 8.  Sometime midday we would go sailing.  At the end of the day there was more boat work to prepare for Friday’s start.  Our team has one poor tendency, as we get closer to a start, our days get longer and filled with more last minute projects.  I hope this is one aspect of ocean racing we can grow out of.

As our schedule progressed we slowly spent more time in the slip and less time sailing.  Having gotten comfortable sailing and racing the boat, we focused on making it ocean crossing ready.

I cannot tell you how anxious and relieved I was when our Transatlantic Race start date finally came around.  The week before had been a hell week of preparation; everyone had been pushed to their personal edge.  To be off the dock and headed for England was the greatest relief. 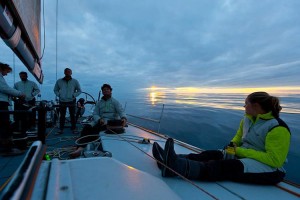 In the end, the long days on shore were worth it.  The race was an amazing adventure that I cannot fully put into words.  It is an awesome experience to have nothing to do but race a sailboat as fast as possible across a vast ocean with seemingly no end in sight.  As we neared the finish, I think many of us actually wished there was no end in sight.  I suggest all sailors to try it, as it is truly an adventure that can only be experienced.