Posted at 19:55h in Offshore Team Blog by DM Patten 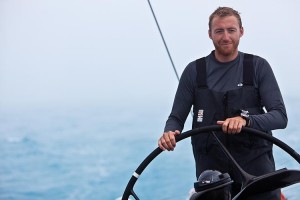 Our apologies for the late report, we’ve just made our third gybe today, gybes 1 and 2 coming in the past few hours. While we are still very much committed to our southerly route, we’ve been taking small hitches to the north to position ourselves to encounter the high-pressure ridge coming from the south at its narrowest latitude. It also brings us closer to the approaching low from the northwest. We’ve done a pretty good job in the Micro, jibing on good pressure, moving sails (we’ve opted to stack on the rail for a 2% rating penalty), moving gear and sailors below, making sure the boat is sailing fast all the time. But in the Macro we’ve got a long way to go: this ridge, when it does pass, will bring light winds, and the approaching low is weak to the south and won’t be offering us much help.

The high-pressure ridge became a focal point this morning when the favorable 18-20 knot winds we enjoyed for most of yesterday receded to a lighter 10-14 knots and heavy fog. It’s still extremely damp outside and visibility is but a few boat lengths. We were hoping to stay in front of the ridge but the lesser winds slowed progress enough that we had to reposition ourselves to the north. While the going is slow, there’s a lot that can happen in the next 24 hours so we’re all focused on staying positive and coming out of this in better shape than everyone around us.

Speaking of “around us,” our race strategy has evolved pretty dramatically, but in a lot of ways, not at all. We’re no longer sailing with our IRC 1 class in mind: they are literally in another time zone. Boats like Puma and Rambler put what seems like 100 miles a day on us and they have the ability to jump weather systems. We do not, so we can no longer make our decisions with those guys in mind. Our attention has now turned to the closer IRC competitors like Zaraffa, Phaedo, and Maltese Falcon, all closer on the race track and more similar in speed. We are still confident in our game plan though, and we have been all along. There has been no second-guessing and we will eventually turn east and push towards England when we feel that the ridge has passed us by. But only then.

It will likely be a night of a few more gybes, and a night of very little sleep for our navigator Chris Branning.