The Oakcliff Challenge – It’s ON!

13 Jun The Oakcliff Challenge – It’s ON! 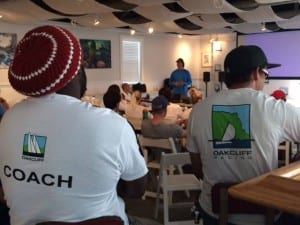 June 13, 2015 – Seven teams from as far away as British Columbia and Long Beach California have arrived in Oyster Bay, New York. Board member and coach Dave Perry started with a video coaching session introducing the teams to Match 40s. It was then out on the water for drills and another video debrief, this time use the video he took of the actual teams performing on the water. Day one didn’t end there, following a quick dinner Dave went into overtime with a match racing 101 session for those that are new to it.

Today will be fleet racing for the Match 40s. With five to six, 45 minute races scheduled, there will be a full day of racing. As a bit of a cross over to Match Racing, Appendix Q for umpired fleet racing will be in place. Dave Perry will be one of the umpires and will coach teams between races and at the end of the day. Other umpires include Timmy Larr and Bill Simon .There will be a famous Oakcliff BBQ featuring fresh clams from Oyster Bay.

Sunday will see an increase in intensity as the teams have experience in the boats and everyone moves into match racing. A round robin is scheduled with a full team of umpires. Program Director Bill Simon explains, “at Oakcliff we are a firm believer in the Clinegatta format where there is a clinic before a regatta. We see huge performance improvements in teams at all levels. “ He adds “It will be interesting to see which of the teams improves the most over the event and which takes away the prizes. Improving their skill and returning to their host club better racers may be reward enough. “

Teams competing this year are: