Posted at 02:02h in News by Oakcliff Sailing 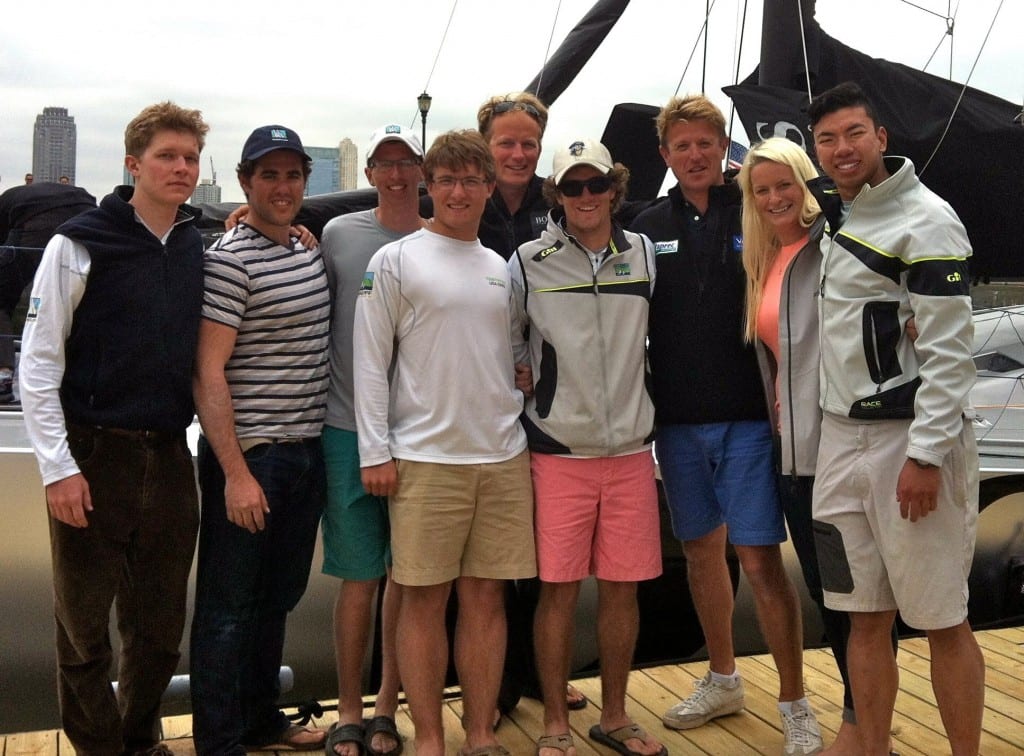 May 30, 2014 – Oyster Bay, NY – Our Saplings went on an exciting once in a lifetime field trip to visit two popular offshore racing boats, Banque Populaire VII and Hugo Boss, on Wednesday afternoon in Brooklyn, NY and New York, NY.

This year, Le Cléac’h plans on setting a new single-handed transatlantic record. Le Cléac’h arrived in New York on Friday May 23rd after leaving France on May 15th. Le Cléac’h made the cross Atlantic journey with five other crewmembers from Banque Populaire V.

A few of the Saplings aboard Banque Populaire VII in Brooklyn, NY

One system that the Saplings found fascinating is the Upside Up cleat system. The Upside Up system allows for the jib to be depowered through sensors within the cleat system. When the trimaran becomes too heeled over, the sensors release 1 meter of the sheet in order to depower the jib.

After the tour, Moreau answered any questions that the Saplings had. To find out more information about the Banque Populaire VII team, please visit their website at https://www.voile.banquepopulaire.fr/Maxi-Trimaran-Solo-Banque-Populaire-VII/default.html.

Once their visit with Banque Populaire VII was completed, the Saplings headed over to North Cove Marina to tour Hugo Boss, an IMOCA 60 monohull, with Ryan Breymaier. For Breymaier, this tour was a huge pleasure; he had never shown an IMOCA 60 on United States soil before and could share the experience with younger offshore sailors. Breymaier said, ” It was great to meet the guys and awesome to finally have the opportunity to show the boat to budding US ocean racers.”

After the tour, the Saplings got the chance to sit down and have a discussion with Breymaier in Hugo Boss. Breymaier discussed how hard it has been to sail in the IMOCA 60 class as an American and offered his professional advice to our Saplings.

One piece of advice that Breymaier has for the Saplings is to choose to specialization in within sailing. This specialization should exist without any actual sailing, and it can consist of boat management, maintenance, tactics, and other important skills. 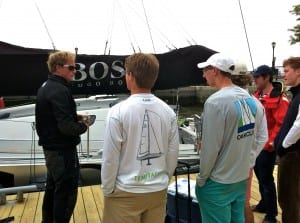 Breymaier only started offshore sailing during college at St. Mary’s College of Maryland in St. Mary’s City, MD. From this experience, he learned the importance of developing young sailors and has made evolving younger sailors a priority in his career.

Breymaier is now preparing for the IMOCA Ocean Masters race that begins on Sunday in New York and head for Barcelona as their final destination. On Thursday, Hugo Boss prepared for the race along with four other IMOCA 60s in the Hugo Boss Watches Charity Race where the winning boat received $10,000 to the charity of their choice. The Hugo Boss crew continued their philanthropic efforts after their win on Thursday in the race by donating their winnings to Angel Flight.

While at North Cove Marina, the Saplings also got a chance to take a picture with Jean-Pierre Dick, the former skipper of Hugo Boss, and see other prominent sailors.

If you want to find out more information on Ryan Breymaier, please visit his website http://breymaiersailing.com.

Overall, this was an enjoyable and invaluable experience for our Saplings. For them, it was a chance to see two ways they can experience sailing on a professional level through other sailing professionals in the business, and they also learned about new advancements and advice that they bring back and use during their sailing at Oakcliff.

Throughout the summer, our Saplings get to have other experiences similar to this in addition to gaining valuable sailing experience both on and off the water. The goal of the Sapling program is to fully prepare sailors to enter the world of professional sailing.