Posted at 21:36h in News by Oakcliff Sailing 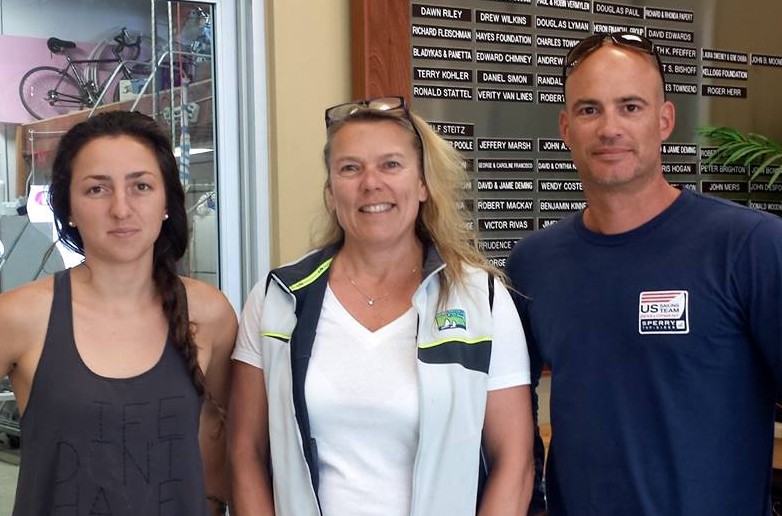 After I arrive at Oakcliff Sailing Center, I’m refreshed. After all our ‘hello’s’ and ‘how you beens’, I sit at one of the many tables and begin to hear discussions I’ve heard before about the state of sailing in the U.S. and possible solutions. The refreshing part is the quickening pace the words flow into action. One of the actions I’ve been lucky enough to be a part of is the purchase and subsequent High Performance Camp for a fleet of eight Olympic Nacra 17s.

When Oakcliff became a US Sailing Training Center and acquired it’s Olympic fleet, I was excited to head to New York to help them get the project off the ground and into the water. Have you ever purchased a boat with an instruction manual? Probably not so many. I lent my multihull knowledge for a few days at the end of the 2013 summer and with the help of the Oakcliff team, Saplings and Acorns we had an assembly line of Nacras pushing out the large front bay door. Not long after, I came back to race the U.S. Nationals on Oyster Bay with the Nacra fleet in full force.

As this year’s summer approached, I received a call to come back to Oakcliff to coach their High Performance Camp. I arrived a few days early to get some of the Nacras back together after their trip to Miami for the US Sailing Team and European teams to train on during the winter, a gesture by Oakcliff that is actually a completely different compelling story. With the Nacras assembled, we were ready to receive this batch of Acorns.

The High Performance Camp was not just for Nacras, but also for the Olympic skiff, the 49er FX, so there were cat sailors and skiffies mixed together, all ready to go really fast. The wind cooperated. The first three days of the camp the breeze ranged from 15-20 knots, which gave the Acorns a real taste of speed. There was so much wind that only the very experienced cat sailors were able to drive and let the less experienced sailors crew. I was impressed. The ages of the Acorns were teenagers to the most experienced Acorn ever, Ed, who actually set the experience level to a new standard. They all picked up multihull sailing fast, listened and put my teaching into action. For me, the first three days were a blast, going fast and coaching technique on and off the water, with some long classroom morning hours as well. For our Olympic campaign I have relegated myself to the crew position, so driving for three days was pure joy.

The last day of our four-day camp, the breeze backed off so whoever wanted to steer around the course had at it. We had three Nacra 17s ripping around a short ½ mile course totally under control and racing hard. That was the moment I knew we did the camp right. After a few days of watching and learning, the Acorns took control, kept control, communicated properly, and made excellent decisions while having good technique. The long days of starting at 9 AM and ending around 7 PM (If they didn’t have Swedish Match 40 evening sailing, which is pretty amazing too) paid off. Mission accomplished! Really great group of sailors and new friends in this camp.

Thank you to the Oakcliff Staff: Dawn, Bill, Liz, Chris, Vlad, Ronnie, Ladi, and all the Saplings who were the glue to the daily routine. The words and actions are working!