Massive Comeback from Lees at the Oakcliff International 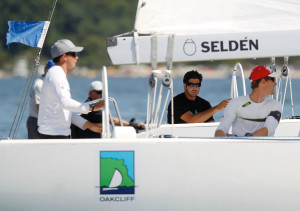 08 Sep Massive Comeback from Lees at the Oakcliff International

Oyster Bay, New York – Dark horse Mark Lees (GBR) and Team Echo Sailing started off the day with some key wins after ending the round robin in ninth of twelve teams.  An action-packed repechage battle against Ashlen Rooklyn (AUS) landed Lees with the eighth spot in quarterfinals, despite a solid effort from Rooklyn’s Ballyhoo Racing with a skillful spin and win in the second match.  The real excitement of the day, however, came with the quarterfinals. 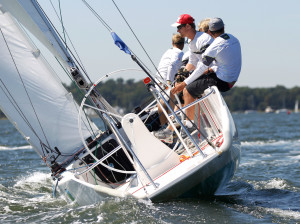 Chris Poole (USA) and Riptide Racing faced lowest seed, Lees, in the quarterfinals, but had tougher matches than they anticipated.  According to Poole, they “gave away the prestarts as Lees capitalized on every mistake [they] made.”  Light conditions made shifting gears important and Lees proved his ability to maintain speed and stay in phase with oscillations throughout the series.  “We were very nervous being in front, but very frustrated being behind, so we decided we would rather be nervous than frustrated,” said Lees about the close racing.  In the third race, Lees took the first penalty in the prestart, but an offsetting one on Poole followed and Lees was able to carry his lead all the way around the course.  Team Echo Sailing ended the day with a stolen spot in the semifinals from Riptide Racing, sending the winner of the round robin home with a fifth place finish. 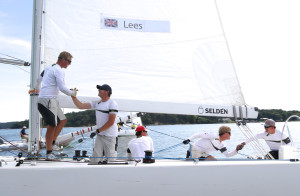 Despite being a close match on paper, Eric Monnin (SUI) was also able to dismiss his competitor, Chris Steele (NZL), in only three races.  On the other end of the spectrum, both matches of Nicolai Sehested (DEN) versus Dustin Durant (USA) and David Gilmour (AUS) versus Robert Hughes (USA) fought until a fifth, winner-take-all match with Sehested’s TRE-FOR Match Racing and Gilmour’s Team Gilmour taking the last semifinal seats.