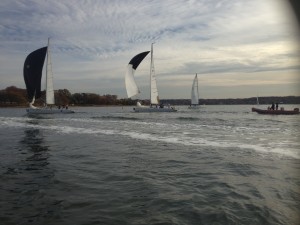 It was a chilly day but eight teams turned out for Oakcliff’s Grade 5 Open November 9th. These were eight stacked teams for instance the #2 match racer in the US, Chris Poole and Sap Grad Jon Hammond were crewing for Avi Lessman. Bryan Lawrence had a team of South Shore of Long Island rock stars and Oakcliff staff including Ladi Oguntoyinbo and Vlad Shablinski as well as acorn Ollie Shenberg.

The morning began with two hours of starting drills and two-boat testing led by Dawn Riley. As Prudence Thiry, crew on Danielle Gallo’s almost- all women’s team, explained, “Pre-race drills are a great warm-up and to smooth out boat-handling issues and really focus on tactics. It sets a benchmark for how we do the next time. The fact that there are on the water coaches is such a treat!” This event was a Clinegatta—a combination match race and clinic a format created and coined Clinegatta by Dave Perry.

With the wind consistently shifting, PRO TJ Shea was forced to reset the course and re-sail multiple matches. As luck would have it, 3 included Andreas Giacoumis with Oakcliff Supporter Jamie Ebeneau on board calling tactics. We hope they appreciated the extra starting practice!

Giacoumis sailed a great race in Flight 5, to defeat Avi Lessman who was up until then undefeated. Lessman had a strong day on the water with great boat speed and sharp tactics. Lessman was joined by terrific crew, Chris Poole(ranked #2 in the US) and SapGrad Jonathan Hammond.

As always, Oakcliff was multidimensional. There were women on most boats, 2 of the 8 skippers were women and the umpires served as mark boats as well as coaches. To top it off three Shields also braved the cold, fleet racing on the south end of West Harbor.