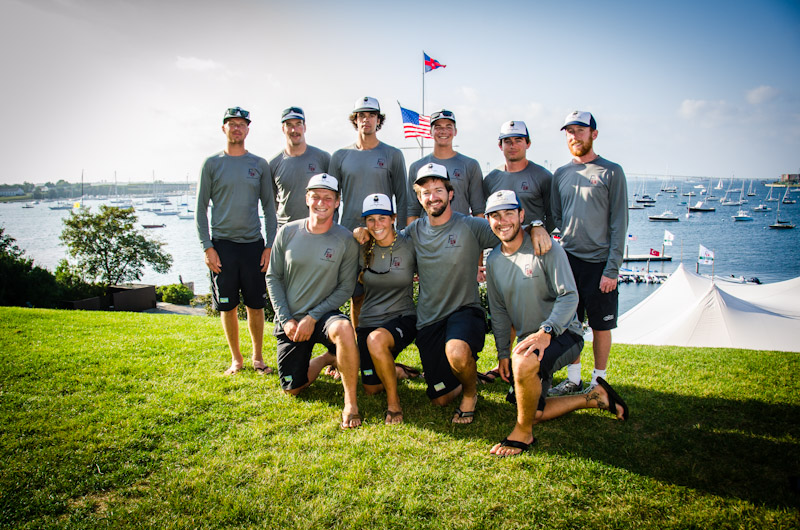 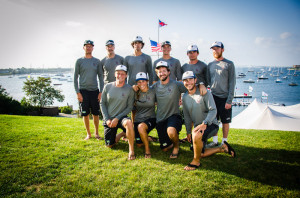 Racing for the Farr 40 Worlds and the Oakcliff Youth Farr 40 Racing programme concluded on Friday with the final two races of the series. We went into the day hopeful of beating out our Corinthian competition, White Knight, for the Corinthian trophy. They had a lead of 6 points on us, and we knew this was going to very difficult to overcome. The first race of the day was looking promising and we were sailing quite well but the rest of the fleet was as well. In one of the closest first mark roundings of the event, there were hardly more than 20 lengths from the first boat to the fifteenth after the first beat. However, by the end of the race, even the smallest of errors and boat-speed differences meant that those feet translated directly into the loss of a boat. A foot or two lost here, a boat or two lost there. The fleet is relentless in its punishment of errors. We ended with a 14 and White Knight a 13; not exactly the direction we needed to head.

The second race went on to see us ahead of White Knight by some lengths, but then to lose by a matter of only feet after needing to do a penalty turn just meters from the finish. In the end, the point spread was nine points in White Knight’s favor.

When we look at the scores, the team is first disappointed that we did not post a couple more solid finishes or continue with our momentum from Pre Worlds, where we were top Corinthian boat. However, when we look deeper, it’s clear to us how far we’ve come. Pre Worlds and Worlds mark a monumental improvement from our first class event at the NYYC Annual Regatta. There, we didn’t beat a single boat. In fact, far from it; we were struggling to keep up at the tail end.

North Americans marked a turning point; we beat one boat in one race. Not quite inspired. However, at Worlds we were never NOT in the mix. It was always a battle and we proved we weren’t there just to make it a 15 boat Worlds. We crossed ahead of former World Champions in many races, often battling tooth and nail with them for each point until the very end. Often, it didn’t go our way, but in some brilliant moments, it did. We rounded in third at a weather mark as a highlight and often had better leeward mark roundings than the competitors around us; a testament to the bow team! At Annual Regatta there was a sense of awe and timidity that showed itself in our tactics. This had nearly evaporated by Worlds, and we were able to assert ourselves and truly take part, rather than be also-rans. We had paid our dues. We were finally able to control our own destiny on the course. I think that we have performed at a level belying our experience and in doing so have accomplished our true goal of emphatically introducing ourselves on a grand prix stage to some world-class sailors and earning something very much like respect. Though I don’t hesitate to say we have a long way to go, we’ve also come so far.

In the end, we are thrilled to have had the opportunity to compete in the Farr 40 Class this summer. We have all learned a great deal about all aspects of racing: tactics, strategy, boat preparation, tuning, team management, and the list goes on. We owe a huge thanks to Oakcliff, first of all, for doing so much to get us on the line at worlds; from the boat, to entry fees, to help with logistics, coaching, and just simple advice. Further, thanks to the Farr 40 class, particularly Tink Chambers and Geoff Stagg who were so patient and helpful in all areas of the class and every competitor who leant us their ears and contributed even a snippet of knowledge and many who gave much more. All of these guys—the management and the competitors—are irreplaceable; they are the reason that the Farr 40 is still a premier class, even years after earning its tenure. And finally, thanks to our great sponsors: New England Boatworks, Newport Shipyard, Ronstan, Myna, Robline, Composite Rigging and the individual contributors who all played integral rolls in our campaign. We are supremely grateful to have had your support in this effort and cannot thank you enough!