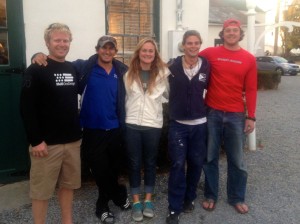 Oyster Bay, NY—November 1, 2013—Ten teams arrived at Oakcliff ready to practice for this weekend’s Halloween Invitational, a Grade 3 Match Race, only to be met with 25 knots of wind and gusts near 50 requiring a shore delay. The competitors milled anxiously around Oakcliff’s America’s Cup–style campus wanting to get on the water. By Midday conditions moderated and everyone headed out to practice on the ten Match 40s, the largest fleet of these boats in the world.

Top-ranked among the competitors is Chris Poole. Poole trains at Oakcliff and is sailing with his sister Holly and three Oakcliff graduates, Chris Kennedy, Solomon Krevans and John Coburn.

Lance Fraser, ranked 90th in the world, is joined by Max St. Maurice, a SapGrad who now runs his own training center, the International Sailing Academy, in Mexico during the winter and works and sails on a Multi One Design Trimairan in the summers. Also with Fraser is Vaughn Harrison, St. Maurice’s business partner in Mexico and fellow sailor on the MOD 70.

Two Canadian teams Nick Kroger (CAN), and up and comer Chantal Hearst (CAN) are visiting from the Great White North. Hearst returns to the helm with an all women’s team. Hearst’s Oakcliff debut was as a last minute sub for helm Magnus Sandberg at the 2013 Oakcliff International. Also racing are three Midwest teams –David Niemann (WI), Peter Holz (IL), and Matt Graham (MI).

“While the sailing season traditionally ends in October on Long Island Sound, Oakcliff deliberately plans regattas into November to take advantage of heavy breeze,” explained Program Director Bill Simon. He added, “Although in the spirit of full disclosure, past Halloween Regattas have seen a freak snow storm and last year’s Hurricane Sandy.” This year the Midwest and Canadian sailors are finding the slightly southern climes enticing. Today’s afternoon practice ended up a balmy 70 degrees and sunny and the weekend’s forecast is similarly pleasant.