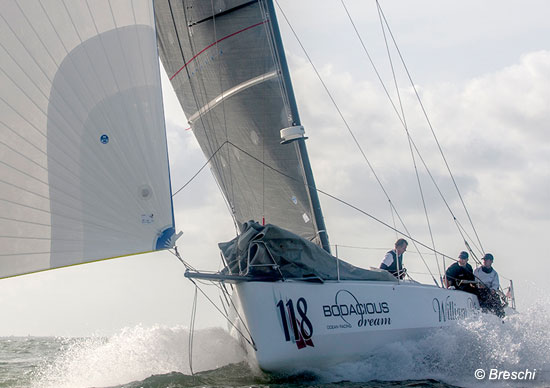 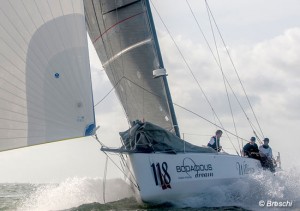 Oyster Bay NY – The Oakcliff Ocean Racing Team is pleased today, to confirm their entry in the inaugural RORC Transatlantic Race. The team will start their training in less than a week sailing the newly donated Class 40 Bodacious Dream from Southampton England to Lanzarote in the Spanish Canary Islands.

The RORC Transatlantic Race starts in Lanzarote November 29, off the coast of Africa and finishes 2700nm later at the Caribbean island of Grenada. With an impressive fleet of boats the race will be an intense proving ground for the team.

The ability to compete in this race marks an incredible opportunity for the Oakcliff Ocean Racing Team, which was formed almost 12 months ago by Oakcliff Grads, Dan Flanigan (23) and Hobie Ponting (23). The goal for the team has always been to sail the 2015 NYYC/RORC Transatlantic Race starting in Newport, RI with the finish in Lizard Point, UK.

The 6600 miles that will be sailed in the coming months aboard this Class 40 will give the core team a huge bucket of experience to pull from going forward. The generosity of Bodacious Dream LLC has made this possible.

The boat has an excellent pedigree, placing 2nd in 2012 Atlantic Cup and 1st in 2013. She also safely carried Dave Rearick around the world in a 2013-2014 solo voyage. Dave’s story is featured in the current Sailing Magazine.

“We have worked hard over the past 12 months to make our Ocean Racing Team a reality,” explained navigator Hobie Ponting. “Building your own team is difficult and it often seemed like it would never happen. And then all of the sudden we have a boat and a program and we are headed to Europe!”

The team of Oakcliff Grads, Dan Flanigan, Chris Kennedy (26), Andrew “OD” O’Donnell (27), and Hobie Ponting will be departing for England at the beginning of November where they will meet with the crew of Bodacious Dream to get a walk through of the boat before the handover.

After completing the race the team will go into full fundraising mode as they set their sights on the west to east transatlantic.

We are grateful for our current sponsors 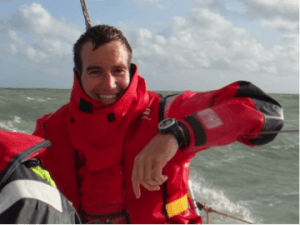 Dan Flanigan, 23, is from Tiverton, Rhode Island where he grew up sailing dinghies on Narraganset bay. Dan’s passion for engineering lead him to Bucknell University in Pennsylvania where he graduated with a degree in civil engineering. After Bucknell he was accepted into The University of Southampton’s Yacht and Small Craft Design program where he earned his masters degree. While in University Dan found time to win IRC Nationals, Block Island Race Week, and secure the Around Jamestown Record (in an F18). Other notable results include the 2013 Marblehead to Halifax, Farr 40 World Championship, Garmin Hamble Winter Series, and Student Yachting Nationals. 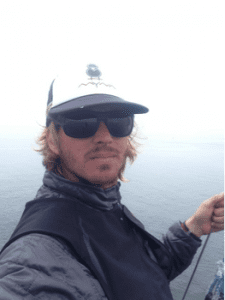 Hobie Ponting, 23, grew up sailing catamarans in southeastern Wisconsin. After spending years in cats, he moved to big boat sailing out of South Shore Yacht Club on the shores of Lake Michigan. He was inspired by his mentors including Tim Kent and the day he graduated from college he packed his car and moved to the east coast to pursue professional sailing at Oakcliff. He has not looked back. Currently, Hobie is focused on offshore sailing, serving as a navigator and boat captain on boats in the 40-50 foot range. He has competed in notable races including Around Block Island, Marblehead Halifax, Ida Lewis Distance Race, and Newport Bermuda. 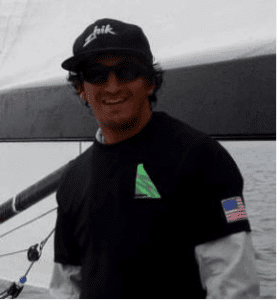 Chris Kennedy, 26, is an aerospace engineer who first got his taste for sailing on scows and Melges 24’s in Wisconsin. After a successful college sailing career with the University of Virginia, Chris has been busy since joining Oakcliff Sailing in 2012. He has been competitive in many events such as Melges 24 Nationals, F18 Worlds, and was a C-Scow World Champion in 2011. A member of Riptide Racing, the #1 ranked team in the U.S., Chris has been match racing at the highest level, competing in the 2014 Congressional Cup along with two stints at the Bermuda Gold Cup. He has also raced offshore in the Newport Bermuda Race and the Chicago-Mac Race. Chris now looks forward to adding significant offshore mileage to his resume with the Oakcliff Ocean Racing Team in its debut transatlantic crossing in November 2014. 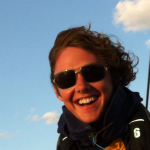 Andrew “OD” O’Donnell, 27. You might think growing up on a horse farm in upstate NY wouldn’t have anything to do with racing 12 Meters in Newport, RI but Andrew O’Donnell would tell you otherwise. People call him OD but it is his grit, brawn, and determination from his farm days that led him through two seemingly different worlds. OD is currently the Boat Captain and Program Manager for Temptation Oakcliff’s Ker 50. OD has had much success with Temptation taking her to impressive results in the 2012 Newport Bermuda Race, 2014 NYYC Annual Cruise and the 2014 NYYC Annual Regatta among others.