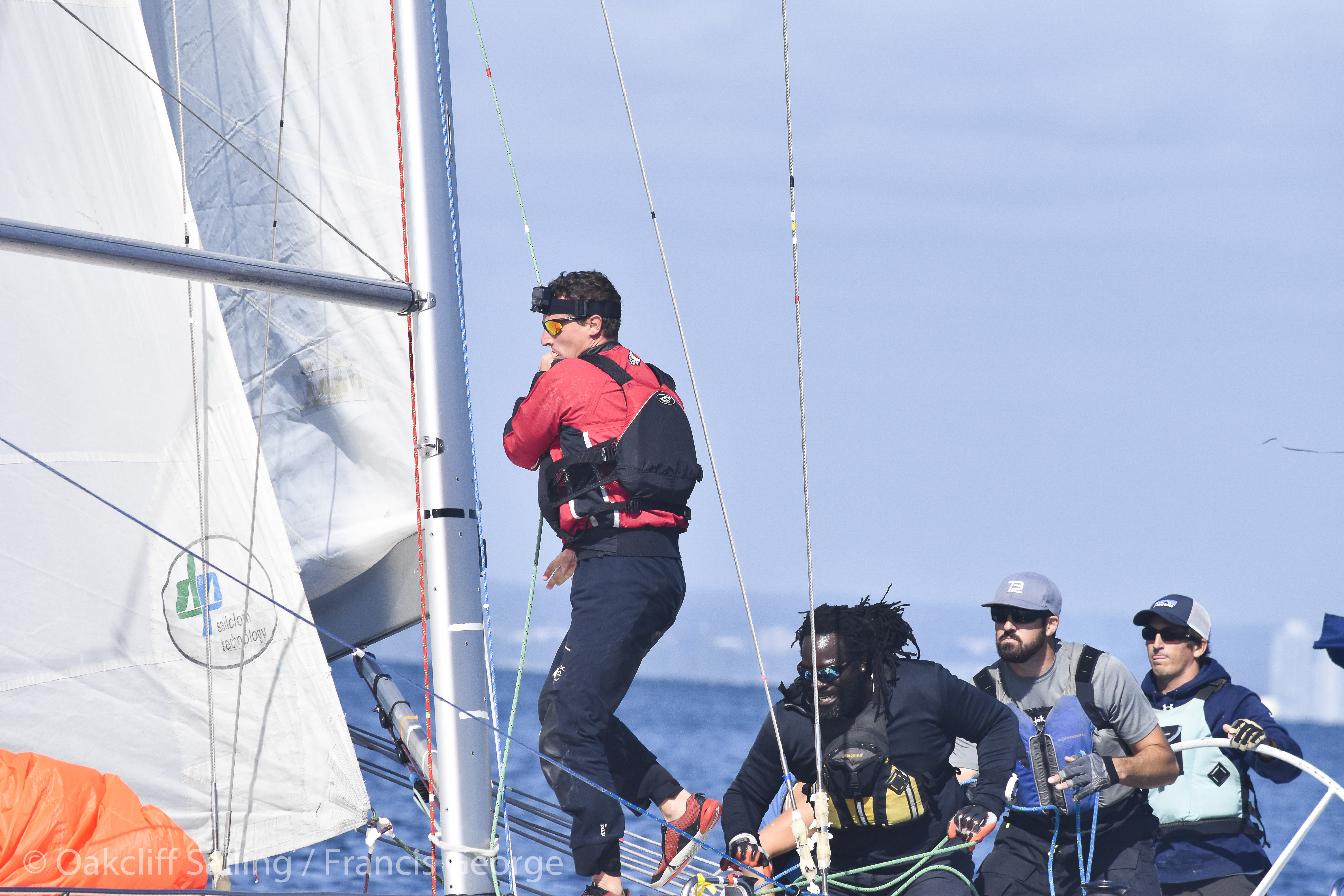 Posted at 00:23h in Blog by Francis George

Chris Kennedy first came to Oakcliff in the summer of 2012 after graduating from the University of Virginia with a B.S. in Aerospace Engineering. He was one of the earliest Sapling classes and accepted a job offer at Oakcliff at the end of the summer. He eventually became the Match 40 Fleet Manager and the all-purpose question answerer in the shop and on the water. From composites to rigging, engines to electronics, and sail trim to tactics, Chris can do it all and explain why too. (Often in more detail than average sailor can comprehend).

In the fall of 2018, Chris ended his tenure at Oakcliff and started at Melges Performance Sailboats in Zenda, Wisconsin, which is just a short drive from where he grew up. He began installing deck hardware on boats and helping with the lamination process of boat hulls. He is now taking lead on building A Scows, the first time the company has built them since 2008. Chris is experimenting with a new self-tacking jib and a new spinnaker dousing system. He is also helping to build a brand new design: a three-sail, two-person dinghy that looks kind of like a mini Class 40 or a Volvo 70. They finished the first prototype and took it for a test sail at the end of last summer. On top of all of that, Chris has also, once again, established his reputation as the all-purpose question answerer in the shop.

He lives on a five acre farm with his fiance, Kendra Sandberg, and their dog, Piper. As you can see in the picture above, Chris waited until Piper’s birthday to propose. As the official office dog, Piper was just as dear to the Oakcliff family as he is to Chris and Kendra.

When they first moved to the farm, Piper would get tuckered out after an hour of throwing the frisbee around. Now she gets to run around so much that it’s nearly impossible to tire her out. Piper isn’t the only animal on the farm; they have seven chickens and three ducks. Kendra specifically chose each chicken based on the color of egg that it lays so they could have “rainbow eggs.” Their chickens lay eggs that are dark brown, light brown, white, pink, and green.

The farm has been a real labor of love for Chris and Kendra. Chris is flexing every bit of mechanical prowess to renovate the house while Kendra has been hard at work restoring the grounds. When they first moved in, the house felt like a giant work zone: unfinished walls and floors with a scant table and several chairs. Chris worked overtime to finish it in time for Christmas this year and they were able to host 35 friends and family members. It is now fully finished and furnished.

“It’s nice to have more places to just sit down,” Chris remarked. “Finishing the second floor is the next big project.”

Meanwhile Kendra has been building a flower farm outside with a network of raised beds. They plan to have their wedding on the farm in the Fall of 2021 and they are determined to make it as picturesque as possible. There is a long work list though. Besides the house and the five acres of land, there is also a barn that needs some TLC, a 1950s tractor, and one of the first zero turn mowers from the early 90s.

In addition to his work at Melges, Chris has stayed in touch with the sailing community doing some match racing and coaching at the Chicago Yacht Club and some freelance rigging for local boat owners. He also gets to compete at Melges regattas and represent the company. As much sailing as he still does, it doesn’t compare to Oakcliff where he got to eat, sleep, breathe, and drink sailing.

“I miss the culture and the atmosphere of sailing at Oakcliff,” said Chris. “Coaching in the evenings, racing on the weekends, going offshore…there was always something. At any moment I could get called out of the shop to race down to the water to fix a problem, but it was nice. I loved walking down the dock at OBMC and talking to sailors and then walking through the yard and talking about boats, and then getting back to Oakcliff and talking about sailing again. Everyone you talk to is all sailing all the time but in a good way and if I wanted to get away and go to dinner with Kendra, do horse stuff, or hang out at the apartment, I could. But it was a really good feeling to be part of the sailing world and doing good things in it. Of course there were bad parts too, but I’d put up with them again to do it all again.”

As much as Chris misses Oakcliff sometimes, he and Kendra realize they have found a really nice pace of life in Wisconsin.

“It’s a slower pace of life here but it’s nice. Our neighbor will just stop by and drop off food. I have breakfast once a week with my parents and often help my father with renovations on his house. If I want to, I can drive to my sister’s house and go to her kid’s birthday; I couldn’t do any of that living in New York. I missed my lake also, Lake Geneva, but I miss the salt too.”

Chris will return to Oakcliff as a coach for the Match Racing Warm Up Session on March 29. Even if you don’t take the class, feel free to stop by and catch up with Chris. You may even see Kendra and Piper too as Dawn actually included a clause in his coaching contract requiring him to bring them 😉 You can also reach out to them on social media and share some comments and well wishes with them.